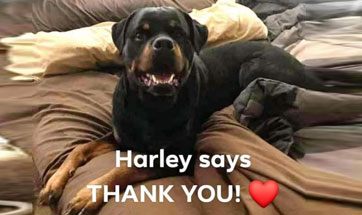 One of MCPAW’s goals is to keep people and their animal companions together – especially when faced with devastating hardships through no fault of their own. Such was the case with Harley the Rottweiler and his best friend, Peter, a military veteran. The impact of COVID-19 took a large toll on Peter’s income, making it difficult to pay his bills and keep food in the home for the two of them (Harley is a big, hungry boy!). To make matters worse, Peter recently found himself at a local hospital in cardiac arrest while his electric bill penalties skyrocketed. Wonderful people heard about the situation on social media and did what they could to help, but after Peter returned home, the utility company shut off his electricity, When snow and freezing temperatures arrived, Peter and Harley had to cuddle together to stay warm in a home with no electricity and no heat. A MCPAW supporter brought this situation to our attention and, within hours, we were able to connect with Peter and pay off the balance of his electricity bill via our Companion Grant fund and were able to tell Peter that the power would be back on very soon. We were overjoyed later that evening when Peter sent us a photo of a lamp lighting up his room, and again the next morning after he and Harley awoke from a night of sleep in a heated home, together.

A few days later, several MCPAW Board members and volunteers met Peter and Harley in person at our weekly Free Pet Food Pantry distribution event co-hosted by our wonderful partner the Montgomery County Animal Services Adoption Center (9-10:30am Saturdays at The Shrine of St. Jude Catholic Church – 12701 Veirs Mill Rd, Rockville). Times are hard for many pet owners and, to date, we have distributed over 30,000 pounds of pet food to hundreds of local pet families.

Our mission is to end pet homelessness and suffering in our community with proven actions and compassionate services including providing veterinary care, pet food, and other resources, and removing all barriers to adoption including keeping shelter animals medically and emotionally healthy and matching them with well-prepared adopters to create forever homes.

MCPAW's Combined Federal Campaign number is:
69792
We hope you will consider pledging to MCPAW